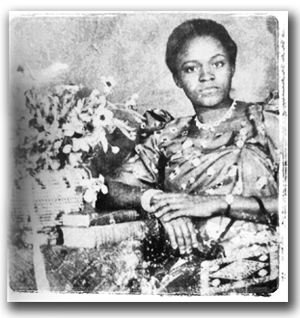 Regina Namusoke was born on November 13th, 1936 in Uganda. Her parents were the late Enerico (Henry) Mukasa Nnyanjateyewalwa and the late Nansubuga Elizabeth. She was one of seven children (4 sisters and 2 brothers). She was a mother to 13 children (9 girls and 4 boys) three of them have so far died of AIDS.

Regina Namusoke lived her final year in the village of Lyamutundwe where she lost her battle with cancer in 1998. In fact, by the time they realized that it was cancer; it was too late to do anything.

She was known for her kind heart and love for children. In addition to raising her 13 children, she took good care and raised several grandchildren as a single mother. She did without shoes at times, so her children and grandchildren had means to go to school. Her house was open to everyone in the village and always fed whoever was in need.

Your Support!
If you would like to become a sponsor or simply make a donation, please Donate Today:
The Regina Namusoke Foundation
303 Williams Avenue, Suite 711
Huntsville, Alabama 35801

The Regina Namosuke Foundation is recognized by the Internal Revenue Service as a 501(C)3 Non-Profit Charitable Organization. Donations, less the value of any goods or services received in return for the amount of the donation, may be considered charitable contributions by the donor for income tax purposes.
Recent Posts
Mission Statement
To restore hope by providing the basic everyday human needs to the abused, less fortunate children, elderly, mentally ill/challenged, and their families in the village of Lyamutundwe and the surrounding areas through education, facility improvement, and health care in an effort to help improve their general standard of living.